More than 200 Members of the Association of Contracting Plumbers of the City of New York, Inc. (ACP) and their guests participated in its Annual Charity Outing, which was held on May 6, 2013 at the Old Westbury Golf and Country Club in Old Westbury, Long Island.

In 2004 the ACP decided to use its “Plumbing Industry Day” for a more important purpose. In addition to coming together, getting some fresh air and enjoying each other’s company, the ACP chose to use the Outing as a fundraiser for a deserving charity. The ACP chose the Leukemia Fighters as its 2013 charity. 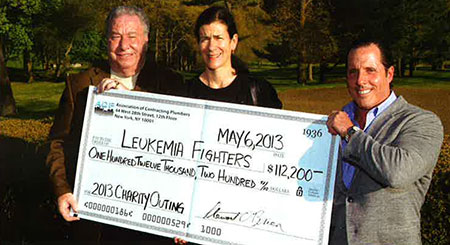 The ACP is happy to report that $112,200 was donated to the Leukemia Fighters and that, in the nine years since it began the charity donation, over $625,000.00 has been raised for various charities.

Leukemia Fighters at New York Presbyterian Hospital is a Program in which donations are directed by the Leukemia doctors to new and ongoing clinical and research projects designed to treat and find cures for leukemia. A number of families within the Plumbing Foundation community have had firsthand experience with the leukemia staff at NY Presbyterian Hospital. While we cannot speak to the technical and medical research issues involved, we can state that the care and attention provided by all the staff is simply magnificent.

In fighting this disease, hospital stays are not measured in days, but rather in weeks and, in some cases, months. The staff (the doctors, the physicians assistants, the nurses, the food service staff, the cleaning staff and others) know how difficult these long term hospitalizations are and every day they make a tremendous effort to support the patients emotional needs as well their physical issues.

Thank you Leukemia Fighters for your dedicated hard work.