We strongly suggest that anyone seeking to renew their license(s) in 2012 or early 2013 register for these courses. Please use the CTLTC’s website to sign up.

PLEASE BE AWARE, THERE ARE LIMITED SPOTS FOR THE MAY 23rd COURSE & THOSE SEATS MAY BE FILLED WITHIN THE NEXT TWO WEEKS.

REMINDER – Completion of this 7-hour course satisfies the requirement for both Licensed Master Plumbers and Fire Suppression Contractors seeking to renew their license(s) which, under the new 2008 Administrative Section of the Building Code, is a three year license period. However, licensees are required to take the 7-hour course within 24 months prior to the expiration of the license.

Foundation Board of Director John Scarpinito of JES Plumbing & Heating Corp., was a featured contractor on NBC New York’s “George to the Rescue.” JES was the licensed plumbing contractor firm who obtained the LAA to correct the many plumbing issues of a new home at 146 Lexington Ave in Brooklyn, which was constructed by HPD only a few years ago. JES helped Ms. Anita Clark, the homeowner, who is a 25-year support-staffer with the NYPD, to correct many of the construction problems with the house. The Foundation would like to commend JES for aiding Ms. Clark’s plumbing issues. To view the entire season premiere of “George to the Rescue,” aired on March 24, please
use the link below:

Listed below are excerpts from a March 12th letter written by Eugene Corcoran, Department of Buildings (DOB) Deputy Commissioner of Enforcement, in response to questions the Foundation had on unlicensed plumbing activities. The Foundation thanks Deputy Commissioner Corcoran for his responsiveness to the concerns of the licensed plumbing community whose utmost concern is, and always will be, the same objective of DOB; Public safety through the installation and maintenance of plumbing and gas systems by NYC licensed plumbers.

AD ON ILLEGAL USE OF PIPELINING

On the following page is front side of the Foundation’s latest mailer, which was sent out to thousands of large property managers and superintendents throughout the 5 Boroughs, stating that PIPELINING IS ILLEGAL, as per DOB Bulletin 22/2011:

The office of Technical Certification and Research has reviewed the use of CIPP or epoxy spray lining for the repair of water and distribution systems, sanitary drainage systems, and storm drainage systems and has concluded that such use of pipe lining repair is not considered equivalent in quality, strength, effectiveness and durability pursuant to section AC 28-113.2.2, and therefore, pipe lining repair for any of the above systems shall not be permitted in New York City.

Using Epoxy or CIPP to line pipes is Illegal in New York City
Make sure the company you use is a Licensed Plumber. 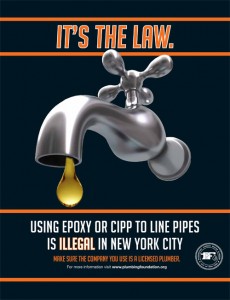