Anyone seeking to renew their license in 2012 or early 2013 should register for this course. Please use the CTLTC’s website to sign up.
WWW.NYCONSTRUCTIONTRADES.ORG
REMINDER – Completion of this 7-hour course satisfies the requirement for both Licensed Master Plumbers and Fire Suppression Contractors seeking to renew their license(s) which, under the 2008 Administrative section of the Building Code, is a three year license period. Licensees are required to take the 7-hour course within 24 months prior to the expiration of the license.

More than 230 members of the Association of Contracting Plumbers of the City of New York, Inc. (ACP) and their guests participated in its Annual Charity Outing, which was held on May 7, 2012 at the Old Westbury Golf and Country Club in Old Westbury, Long Island.
In 2004 the ACP decided to use its “Plumbing Industry Day” for a more important purpose. In addition to coming together, getting some fresh air and enjoying each other’s company, the ACP chose to use the Outing as a fundraiser for a deserving charity. The ACP chose the Juvenile Diabetes Research Foundation (JDRF) as it’s 2012 charity.
The ACP is happy to report that $102,250 was donated to the JDRF and that, in the nine years since it began the charity donation, over $517,700 has been raised for various charities. 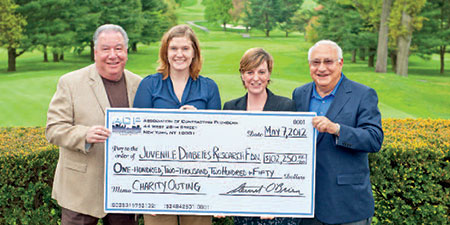 On April 17th Foundation Deputy Director Terence O’Brien and
honorary Member Ken Klein P.E. represented the Plumbing Foundation at the Cooperator’s Construction Expo. The Expo was attended by approximately 10,000 co-op board members, superintendents, and building management staff personnel. There were hundreds of booths showcasing a variety of services, new technologies, and products. The Foundation attended the Expo to educate attendees about the Foundation’s role as a watchdog group for the safety of the City but primarily to inform the public on the pitfalls of using unlicensed persons to perform plumbing work. Many building owner representatives were unaware that by using handymen/superintendants to perform plumbing and gas work they are violating the law, jeopardizing their buildings insurance polices, and most importantly, risking the safety of their buildings tenants. 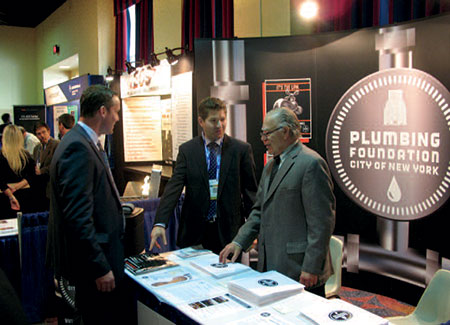 The Department is offering workshops to assist applicants with Limited Alteration Applications (LAA) and updated filing procedures. Registration is required, and there is no cost to attend.
To Register Email: LAA-PR@buildings.nyc.gov or fax (212 566-5823).

Below is 1 of the Foundation’s 4 new educational advertisements which are being published in a variety of construction, real estate, and news reporting websites, blogs, and magazines over the next 6 months. 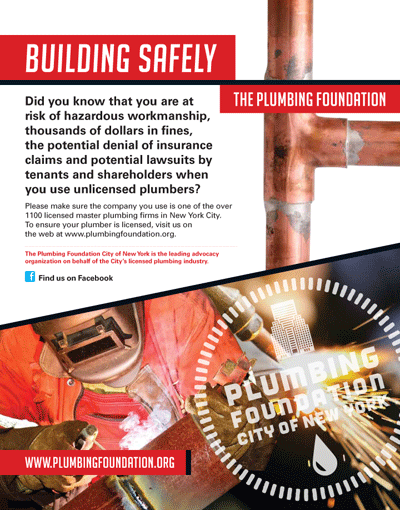