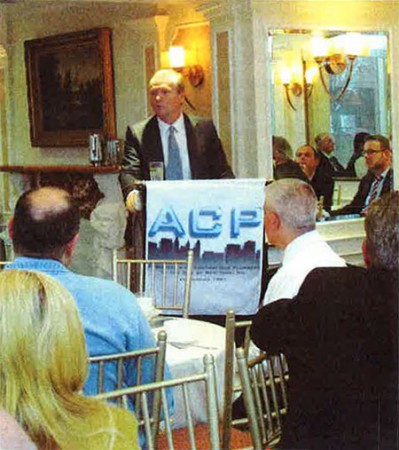 On March 25th, the day before the Lower East Side gas explosion that killed two people, DOB Commissioner Rick Chandler was the keynote speaker at the Association of Contracting Plumbers’ membership meeting. The Commissioner spoke about the importance of licensed master plumbers and their role in protecting the health and safety of all New Yorkers. Mr. Chandler mentioned a variety of topics including how DOB will be transformed into a 21st Century Department with more computerization and e-filing. He understood there are some major plumbing related issues DOB has to address, including the extreme backlog of LAAs. The Commissioner stressed that he understood the plumbing industry’s perception that DOB does a poor job investigating and disciplining unscrupulous licensed plumbers as well as enforcement actions against unlicensed individuals/firms performing and advertising plumbing work in NYC.

It was fortuitous timing that the Commissioner mentioned DOB’s enforcement efforts the day before an apparent unlicensed person caused the catastrophic March 26th gas explosion.

After the East Village explosion on March 26th, media attention was heavily focused on illegal gas work as the main culprit. Preventing, detecting, and disciplining unlicensed plumbers performing illegal gas work remains one of the Foundation’s most important issues, and we have been addressing it through various channels and from different angles for years.

Recently, we were asked to consult with the NYC City Council and the Mayor’s Office on issues surrounding illegal gas work and ways in which it can be prevented. Issues included lax enforcement of Codes and reluctance to pursue unlicensed plumbers who perform gas and plumbing work in the City. DOB’s own numbers show a precipitous decrease in cases against unlicensed plumbers. (2014: 8 cases, 2013: 13 cases, 2012: 8 cases, 2011: 29 cases, 2010: 30 cases, 2009: 32 cases). The Foundation believes that taking stronger and more frequent action against unlicensed plumbers would send a clear message that NYC is cracking down on this extremely dangerous practice.

In April, WNYC reported on the East Village explosion. The focus of the story was on a particular set of shocking statistics-those being the number of reported cases of suspected illegal or faulty gas work that went uninspected by the DOB in 2014, due to issues around access. The Foundation conducted its own research using data from the DOB’s website, and found that in 2014 alone, there were 612 total complaints of suspected illegal or faulty gas work in NYC that resulted in violations or stop work orders being issued in over 400 instances, demonstrating that illegal gas work is a widespread problem. Perhaps more troubiing is that 191 of these complaints resulted in inspectors closing the case due to issues around access. In other words, over 30% of the complaints concerning possible illegal or faulty gas work went uninvestigated last year.

To address the problem of maintaining the safety of certain systems once installed, the NYC Building Code requires many systems to be periodically tested. Sprinkler systems must be tested every five years, facades every five years, boilers every year, water tanks every year, elevators every six months, and so on. Incredibly, though, there is no requirement for the periodic testing of gas systems. Once installed, no one ever looks at the system. Given the extent of the illegal gas problem and the very high risk of danger to the public, “gas piping systems” must be added to the list of systems requiring periodic testing.

The Foundation continues to meet with City officials to educate and inform them on issues surrounding unlicensed plumbing work. Recently, we informed the City of an additional issue that is less well known, that being the issue of e-commerce websites hosting advertisements for possible unlicensed plumbing companies in NYC. These websites, such as Google, Amazon, and others, steer consumers toward firms that are not owned and operated by LMPs (a requirement under the NYC Administrative Code). We advised the City to contact these websites in an effort to stop these advertisements from being hosted, and if successful, it will significantly cut down on the visibility of unlicensed entities in NYC. Unsuspecting consumers should not be subject to dangerous work from these unlicensed entities, and putting plumbing work back into the hands of trained professionals will help ensure safety and sanitation for all NYC residents.

The Foundation will continue in its vigilance to ensure the City and its departments enforce the laws and regulations that keep plumbing work in the hands of licensed master plumbers and keep the City’s residents safe and healthy.

Making sure all plumbing work is performed by licensed master plumbers, ensuring that consumers are not misled by advertisements on the internet about a firm’s legitimacy, adding an expiration to gas authorization, and enforcing Codes more strictly are all effective ways to help prevent another disaster like the one in the East Village.

In 2004 the ACP decided to use its “Plumbing Industry Day” for a more important purpose. In addition to coming together, playing golf, and enjoying each other’s company, the ACP chose to use the Outing as a fundraiser for a deserving charity. The ACP chose “Sanctuary For Families” as the 2015 charity donation. 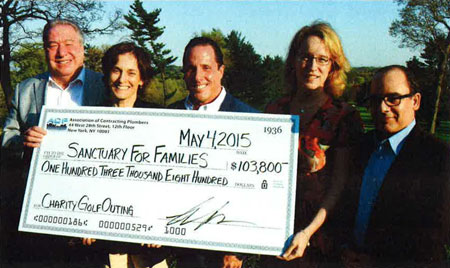 Every year, Sanctuary empowers thousands of adults and children to move from fear and abuse to safety and stability, transforming lives through a comprehensive range of services including clinical, legal, shelter, children’s, and economic empowerment services.

The ACP is pleased to report that $103,800 was donated to “Sanctuary For Families” and that, in the years since it began the charity donation, over $800,000 has been raised for various charities.

The reward will be on first report basis (i.e. if two reports on the same unlicensed plumbing firm, only the first person who supplied the documentation receives the gift card).

SUNY Empire State College, in partnership with the Construction Trades License Training Corp, will be offering a 7-hour course available to persons seeking to renew their DOB-issued plumbing and/or fire suppression license every other month starting in August. (Space is limited to 20 people per course). Registration will be open on June 29, 2015. To register, please go to www.nyconstructiontrades.org for the August course and any future courses.

REMINDER – Completion of this 7-hour course satisfies the requirement for both Licensed Master Plumbers and Fire Suppression Contractors seeking to renew their license(s), which, under the 2014 Administrative section of the Building Code, is a three-year license period. Licensees are required to take the 7-hour course within 24 months prior to the expiration of the license.