On the morning of March 29, 2016, City & State, in conjunction with the Plumbing Foundation, hosted a panel discussion on New York City’s fuel gas issues at Baruch College. The discussion was led by City & State Editorial Director Michael Johnson. In attendance were members of the plumbing industry, Consolidated Edison, National Grid, various government agencies, the real estate industry, the construction industry, Plumbers Local Union No. 1, as well as many others. Topics included the lack of enforcement against bad actors, the pending legislation regarding periodic gas piping inspections, qualifications needed to inspect fuel gas systems, the City’s ageing gas infrastructure, etc.

The panel included Council Members Jumaane Williams and Mark Treyger, as well as David Gmach of Consolidated Edison, Michael Ruiz of National Grid, and the Executive Director of the Plumbing Foundation, Stewart O’Brien. The panel offered invaluable insight and feedback and covered various topics, including the current package of 10 gas-related bills in front of the Council, one of which would require the periodic inspection of fuel gas systems inside buildings in the City every four years.

To watch a recording of the panel discussion, please visit:
http://cityandstateny.com/27/all-videos/policy/live-skilled-labor-(re)building.html. 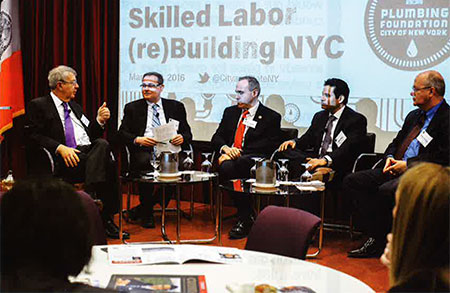 On April 12, the City Council held a hearing for 10 proposed gas bills. The bills address a variety of matters involving fuel gas in New York City. The Plumbing Foundation strongly believes that enacting these bills will help make New York City a safer place for all residents. A continuing mission for the Plumbing Foundation is to ensure that explosions caused by unlicensed plumbing work, such as the fatal 2nd Avenue explosion in 2015, will not happen again.

Indeed, while explosions are rare, serious issues with gas piping are not, and this package of bills will provide transparency and better lines of communication between all parties, including tenants, landlords, utilities, contractors, and the Department of Buildings.

One of the bills included in the package before the Council—Intro. 1088—is especially important in achieving these goals. It would require the periodic inspection of gas piping systems inside buildings for corrosion, illegal hookups, damage, etc., by a licensed master plumber, every four years. There would be an exception for one and two family homes where the likelihood of serious issues arising is minimal. Presently, the Building Code requires the periodic inspection of the following life safety systems and components: boilers, elevators, sprinkler systems, facades, and water tanks. Incredibly, though, there is currently no requirement for gas piping to be periodically inspected. At this moment, the system in place depends on the public to call 911, 311, DOB or the utility company when they smell gas or detect a possibly dangerous situation. The system is driven by complaints and is therefore reactive in nature. Intro. 1088 would put in place a proactive system that will be far more able to detect unsafe conditions before they result in tragedy.

Intro. 1088 is patterned after the requirements and reporting methods already in place for many other DOB periodic inspected systems. DOB maintains a universe of buildings, which require the filing of a report. The owner would file a similar report with DOB and it would be recorded by the department. If there is no report filed by an assigned date, an automatically generated violation would be issued to the owner by DOB. This is the same system already in place and used by DOB for facades, elevators, boilers, sprinkler systems, etc. The system is simple and requires minimal additional workload for DOB.

Testifying on April 12 for DOB, Commissioner Rick Chandler announced that, with new resources being provided by the Administration, the Department will be dramatically increasing oversight of gas piping installations throughout the City. He also announced that 22 new inspectors are being hired who will focus on gas work. However, Commissioner Chandler was not fully supportive of Intro. 1088.

NO MORE SELF CERTIFICATION OF GAS WORK

The Plumbing Foundation supports this change and considers it to be a vital step in combating both illegal gas work and the small amount of licensed gas work that is of an inferior quality. We are pleased to see the Administration taking these actions with regard to gas safety in New York City and are pleased that the Council is eager to pass sensible and much-needed legislation to address these important issues.

On April 4, 2016, Governor Cuomo signed legislation providing for paid family leave commencing January 2018. Employees will be able to use the leave for a variety of purposes (e.g. caring for a new child—adoptive, foster, or biological—caring for a family member with a serious health condition, etc.). Please note there will be a gradual phase-in for the law starting at eight weeks in 2018 and up to 12 weeks by 2021. The most significant aspect of the law to employers is that it is funded entirely by a weekly payroll tax of $1 per employee and likely to be administered by a third-party similar to the model of unemployment benefits.

The ACP will be sending out additional laborgrams on this matter when further information becomes available.

SUNY Empire State College/CTLTC is one of two course providers for the 7-hour License Renewal Course available for persons seeking to renew their DOB issued plumbing and/or fire suppression license. We will be holding in-house courses every month beginning June 22, and continuing on through to December 2016. These courses will be limited to 20 participants. The next course will be held on:

REMINDER– As an NYC certified training program, all participants who complete the 7-hour course will receive a certificate of completion. This course satisfies the requirements necessary to renew a certificate of competence or license for a licensed master plumber and for a licensed master fire suppression piping contractor. Pursuant to New York City Department of Buildings 2014 Administrative Code, Section 28-40.12 and NYC Rule section 19-02, this course must be taken within two years prior to licensee’s renewal date.