The Construction Trades License Training Corporation’s (CTLTC) LAST course for the year will be:

We urge anyone seeking to renew their license to please use the CTLTC’s website to sign up.

REMINDER – Completion of this 7-hour course satisfies the requirement for both Licensed Master Plumbers and Fire Suppression Contractors seeking to renew their license(s) which, under the 2008 Administrative section of the Building Code, is a three year license period. Licensees are required to take the 7-hour course within the 24 months prior to the expiration of the license.

The Plumbing Industry Promotion Fund of New York City held an awards ceremony for recipients of its 2013 scholarships. Each student was awarded an annual $2,000 scholarship. The Promotion Fund provides $80,000 in scholarships each year, to help defray their higher education costs over their next four years of college. 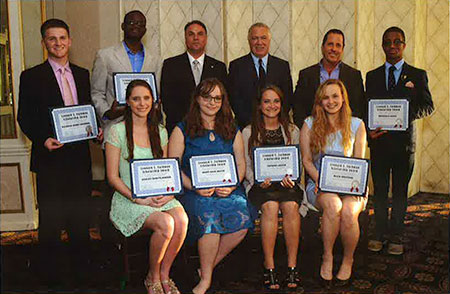 The Plumbing Industry Promotion Fund of New York City has been awarding scholarships for over 30 years. To date, the Promotion Fund has disbursed over $1,000,000 to more than 400 students. Participants in the Scholarship Program may attend any accredited college, university or approved technical institution in the United Sates and may select any course of study.

According to Ralph J. DeMartino, Chairman of the Promotion Fund’s Board of Trustees, the scholarship fund was created to aid the best and the brightest of the next generation in achieving their dream of a quality education at some of the finest colleges and universities in the country. With the costs of higher education on the rise, the Promotion Fund hopes its scholarship fund can help ease the financial burden for these families and keep that dream in reach for these incredible students. “It is a privilege for the Promotion Fund to give back to the plumbing community through the Leonard X. Farbman Scholarship Fund”, said DeMartino.

This year’s scholarship committee consisted of three distinguished educators from various institutions of higher education who selected the winners from over 50 impressive applicants based on their high school grades, standardized test scores and extra-curricular activities.

THE SCAFFOLD LAW: HERE TO STAY?

The Scaffold Law holds contractors and/or owners responsible for elevation related accidents even if they were in no way responsible for the accident. This law has been enforced in New York since the late 1800’s, before we had the Occupational Safety and Health Administration and workers’ compensation. When the law was developed, the intent was to protect the workers. But, as site safety has evolved, the law has not, which leaves the contractor/owner with very little opportunity to defend themselves in accidents of this nature. The contractor and owner absolutely liable for gravity related injuries, even if the worker was grossly negligent. Currently New York State is the only state still carrying this law.

It has been acknowledged there are tremendous costs associated with the Scaffold Law. These costs are passed along to the end user of a construction project. With very little, if any, defense against a potential Scaffold Law suit, the cost of general liability insurance for a New York contractor is high and borderline unaffordable. The butterfly effect is that construction costs increase, the workforce numbers are impacted and skills are conceded as the contractor/owner will look to alternative labor pools. Taxpayers in public works forums end up paying higher prices which often times can lead to the economy suffering.

From a job cost standpoint, it is further argued that reforming the Scaffold Law would stimulate the economy. By reducing the cost of construction and capital budgets, the number of projects would expand which leads to the creation of jobs and economic development.

When dealing with scaffolding it is almost impossible to prevent worker injuries due to the nature of the work. The law currently does not allow the contractor/owner any defense when it comes to scaffold-related injuries (even if the worker is at fault).

The platform to reform the Scaffold Law would allow a New York contractor/owner the chance to defend themselves in instances where the injuries caused are due to the worker’s own negligence or intoxication.

The proponents for the Scaffold Law have a simple message; it saves lives. In instances where the contractor/owner has failed to follow mandated safety requirements, the law acts as recourse for the injured party, providing a venue for recovery for incurred medical costs, loss of wages, impairment of abilities etc. It ensures there is no ambiguity as to who is ultimately responsible for job site safety, especially for those with dangerous occupations. Further, the advocates will argue that the increase in job costs as a result of the law is a burden that the contractor/owner should carry as it pales in comparison to the loss of life or permanent disability of a worker.

Another argument for the law is that immigrant workers generally take on the undesirable/dangerous jobs. The Scaffold Law helps to deter the opportunity to take advantage of a labor pool that is unaware of their rights. In the end, for this contingent it is about ensuring worker protection.

Both sides have compelling arguments; no one wants to weigh the value of human life against the financial onus placed on owner and/or contractor. But, as the only state left in the country with this law on the books, there is obvious need for this issue to be reevaluated. Governor Cuomo has mentioned this issue over his tenure and as he proved with the Tappan Zee Bridge revitalization, he addresses the issues. If you are unfamiliar with the Scaffold Law and all it entails, contact your trusted business advisor for more information. It is always important to be proactive in time like this rather than reactive.

This report contains important information about your water supply and the quality of your drinking water. Water quality test results from the drinking water supply are summarized in the tables in this report. Please go to www.nyc.gov/dep/2012waterquality to view the report and learn more about your drinking water. For a translation of the report, or to speak with someone about the information in the report, please call 311. If you would like a paper copy of the report mailed to your home, please call 311 and DEP will mail you a paper copy.

For more information about the New York City Water Supply and to view previous years’ reports, go to www.nyc.gov/dep.

Linked below is DOB Building Bulletin 8 of 2013 which amends Bulletin 10 of 2012 which established acceptance criteria for flexible fuel-oil piping systems as alternative materials to 2008 NYC Fuel Gas Code.