By April McIver, Esq., Executive Director
On November 9, 2021, the Plumbing Foundation was honored to host a panel of experts for a riveting discussion on the role of hydrogen in the implementation of New York State’s Climate Leadership and Community Protection Act (CLCPA), and New York City’s Climate Mobilization Act. Both laws were passed by their respective legislatures in 2019 and both set ambitious goals for decarbonization. The CLCPA seeks to achieve 100% zero-emission electricity across the state by 2040, and by 2050, reduce overall emissions at least 85% below 1990 levels. Part of the NYC Act, specifically Local Law 97 of 2019, requires buildings larger than 25,000 sq. ft. to reduce their carbon emissions 40% by 2030 and 80% by 2050. How we get there is still being determined, but consideration of alternatives to wind and solar, often discussed but not yet viable on a large-scale for NYC, is a must. That consideration should include energy sources like green and blue hydrogen, which was the focus of the Plumbing Foundation’s virtual seminar. 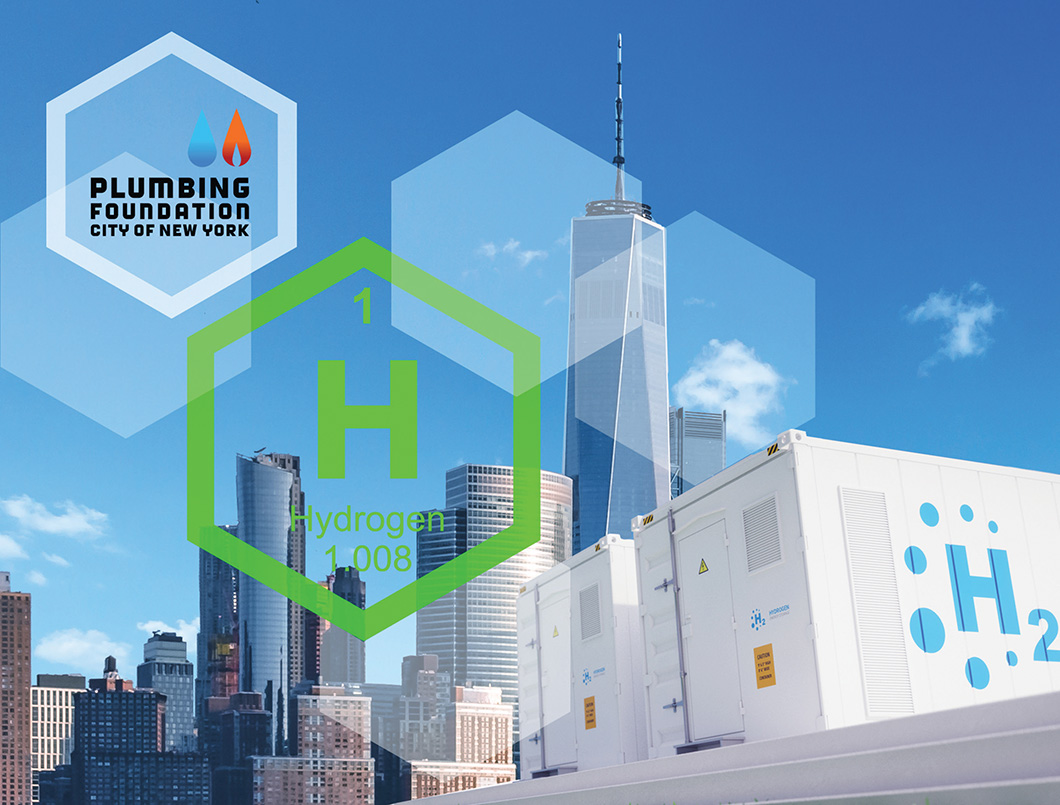 The major takeaways from the Role of Hydrogen seminar were—

—as explained in more detail below.

Neil Skidell, a mechanical engineer and Managing Director of The Par Group and an expert in the strategic use of technology to solve energy and water safety, conservation, generation, and utilization challenges, urged the seminar’s listeners to be open-minded about piped fuels and understand that electriciation is not the only strategy to meet decarbonization. As Mr. Skidell highlighted, New York is currently powered at 40% by natural gas; given the existing piping infrastructure, the Plumbing Foundation and industry stakeholders alike urge decisionmakers to consider hydrogen a part of the pathways to decarbonization.

NYS Senator Kevin Parker emphasized the importance of legislation like the CLCPA and how we are already seeing effects of global warming like the recent Hurricane Ida. He stressed the role of environmental justice and explained that black and latino communities are disproportionately affected by climate change. He said we need to consider not just hydrogen as a fuel but its production and the jobs and benefits that could be created by that production. Hydrogen has great potential to repower plants that may have been powered by coal or gas. The Plumbing Foundation is strongly in support of two vital pieces of legislation introduced by the Senator: S.6497 requires the NYS Public Service Commission (PSC) to create a program to foster private sector innovation and investment in “zero emissions energy systems” in order to meet the targets of the CLCPA, and S.3281 creates a “Renewable Hydrogen Incentive and Financing Program.” We will be targeting legislation like this in our 2022 legislative strategy.

The Plumbing Foundation could not agree more with Senator Parker: New York does not need to completely obliterate fuels. What we need to do is get to net zero, not absolute zero, and we need to take an all-above approach to get there. “I am not against gas” said Senator Parker, he expects some gas use in the future but “hydrogen will be part of that mix as well.” Other important considerations noted by the Senator include the economies of using water for power generation (meaning turning into hydrogen) in balance with our other uses such as for drinking and agricultural purposes. The Senator stressed that studies are the first step in determining how to decarbonize.

Gavin Donohue of the Independent Powers Producers of NY, Inc. (IPPNY), and member of the NYS Climate Action Council, emphasized another major hurdle to reaching the CLCPA goals: we cannot continue to pick winners and losers in the energy sector, we must incentivize investment. Mr. Donohue has sat on the Climate Action Council since 2019, which has been tasked with devising a scoping plan to meet the targets in the CLCPA, the draft of which is to be released December 20, 2021. According to Mr. Donohue, there is a recommendation to place a moratorium on new or repowered fossil fuel facilities in the state. He explained that it is a non-consensus recommendation that IPPNY is against. The recommendation is anti-reliability, anti-business, and anti-consumer. The Plumbing Foundation understands that such a proposal would make New Yorkers’ lives incredibly difficult. “We need creative solutions to meet the demand of the CLCPA” said Mr. Donohue, who highlighted that “dispatchability” of energy is key—that means power can be provided 24 hours a day, 7 days a week, 365 days a year. Technologies, including hydrogen, need to be included in the discussion to ensure our pathways to decarbonization are dispatchable pathways.

What Dr. Devinder Mahajan of the Advanced Energy Center at Stonybrook University is looking into is key to ensuring hydrogen has a seat at the “energy source” table. Dr. Mahajan is a Professor of Chemical and Molecular Engineering and is Director of the Institute of Gas Innovation and Technology (I-GIT). He provided a scientific perspective on how hydrogen can help achieve the goal of the CLCPA. Because New York has significant natural gas pipeline infrastructure, it makes no sense to abandon it but rather consider hydrogen blending. Dr. Mahajan described I-GIT’s “hydrogen economy concept,” also known as power-to-gas, wherein hydrogen is blended into the natural gas distribution system to offset the carbon content of the fuel. “Europe is ahead of us, about 5 years ahead of us in hydrogen blending” said Dr. Mahajan, so now is the time to ramp up on research and studies to ensure hydrogen production is ready and dispatchable.

Jennifer Kearney of Gotham360, a national energy management consulting firm, has major nonprofit clients in the health, education, and institution sectors, who have concerns with the grid capacity, and over having their tremendous investments in natural gas infrastructure be stranded. Her clients have already been working with the NYC government since 2007 to reduce their greenhouse gas emissions, but part of that was making investments in natural gas, infrastructure assets which are nowhere near their useful end of life. “Pathways to decarbonization should consider the value of diversity,” said Ms. Kearney; diversity of energy sources should include hydrogen. As explained by Ms. Kearney, the NYC electrical grid manages its summer peak through “demand-response,” which results in a series of curtailments across the city for large customers who may be running diesel generators or doing load shedding or moving loads from electrical chillers to steam chillers. There are a lot of megawatts in “demand-response.” Now in a decarbonized economy, with possibly stricter rules around diesel generators, in a winter peak scenario, for example, load moving may not be available which creates concerns that the grid is not ready for winter peak.

On the innovation side of things, Paul Schwartz, Co-Founder of ThermoLift, is developing natural-gas-to-hydrogen heating technology. As explained by Mr. Schwartz, New York’s current capacity to electrify would only apply for a certain number of homes but to replace all fuel distributed by the natural gas system, that would be an infrastructure investment of 3-4 times the amount of electricity distributed today. Mr. Schwartz also explained that when looking into alternative sources like hydrogen or renewable natural gas (RNG), it is also vital to consider the end use appliance that needs to use the source efficiently. That is what ThermoLift is developing. It is important for us to engage technologies with a long horizon of success; today we know we can burn natural gas more efficiently and we need the technology and devices to do the same with hydrogen. ThermoLift is currently conducting demonstration programs with utilities like National Grid and Con Edison, meaning the technology of hydrogen as a renewable energy source is almost there.

The Role of Hydrogen seminar was an important discussion on the value of hydrogen as an energy source in decarbonization, but also highlighted a larger issue in the overall policymaking and planning by our decisionmakers to eliminate fossil fuel emissions: we cannot think in a vacuum and must consider all existing and emerging technologies, incentivize investment, and better educate ourselves and our communities.

On November 17, 2021, the NYC Council Committee on Environmental Protection held a hearing on Intro. No. 2317, the gas ban bill. The virtual hearing lasted well over five hours, roughly 100 people were present to testify, and 242 pages of written testimony were submitted. The main proponents of the bill included the Mayor’s Office of Sustainability and environmental advocacy groups like New York Communities for Change, as well as a host of individuals, all emphasizing the need to act now to stop fossil fuel emissions. The Plumbing Foundation submitted testimony in opposition to the poorly worded and ill-timed legislation, as did the Building and Construction Trades Council (BCTC), New York City District Council of Carpenters (NYCDCC), Plumbers Union Local No. 1 Training Center, American Petroleum Institute (API), Northeast Clean Heat and Power Initiative (NCHPI), Utility Workers Union of America (UWUA), Real Estate Board of NY (REBNY), and Building Owners and Managers Association of Greater New York (BOMA). Numerous other organizations did not testify in outright support or opposition but rather submitted proposed revisions to the bill, including a phased-out timeline and clearer exceptions to the ban. 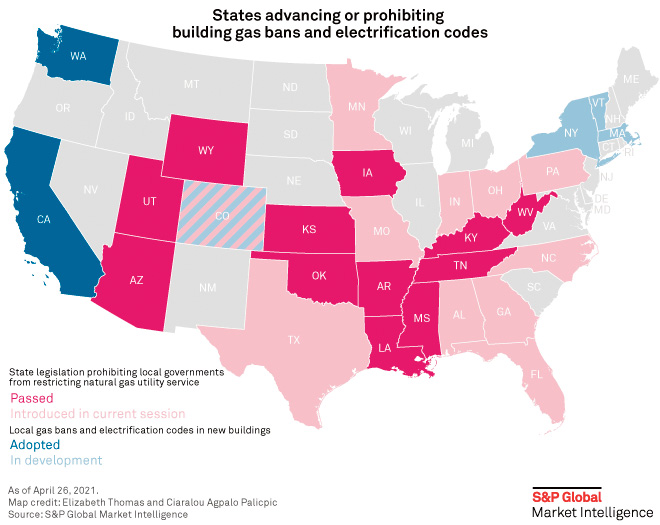 The Plumbing Foundation’s Executive Director, April McIver, testified that the bill, which seeks to ban natural gas hookups on new construction and major renovations beginning in 2024, is extremely vague and that the text can be interpreted to apply to a much broader universe of buildings, not just those doing gut renovations. In addition, she emphasized that the effective date of 2 years from passage is nonsensical in terms of the timeline of emissions goals in the NYC Climate Mobilization Act and NYS Climate Leadership and Community Protection Act (CLCPA), especially given that the plan to meet those emissions targets is still being determined. Further, there is no cost impact study on either the state or city level. Rather, Executive Director McIver said that the Council must take a common sense approach which must include: (1) wide-encompassing industry and stakeholder involvement; (2) a diversified and incremental approach to phasing out carbon-emitting energy sources; and (3) educational campaigns aimed at explaining the facts, science, and data behind that diversified approach. If the Council does not use a diversified and incremental approach to meet its own climate protection goals, it is inevitable that down the road stakeholders will return to another hearing on much-needed revisions to Intro. No. 2317.

Following the hearing, the NYC Council held individual meetings with relevant stakeholders to begin hashing out potential revisions to the bill. The Plumbing Foundation awaits a revised text and will continue to keep the industry informed of the bill’s progress.

Relatedly, the NYS Senate and Assembly will be pushing their own gas ban bills come the 2022 legislative session this January. Sponsored by Senator Brian Kavanagh and Assemblywoman Emily Gallagher, S.6843A/A.8431 is also a major priority of the Plumbing Foundation and will be closely monitored.

To view the Plumbing Foundation’s written testimony on Intro. No. 2317, please visit:
www.plumbingfoundation.nyc/our-work/advocacy/

REMINDER – What to Know Regarding Backflow Prevention Devices and Sprinklers

As the industry knows, property owners must hire a Licensed Master Plumber (LMP) to install a backflow prevention device. However, please remember that when installing a backflow prevention device on a sprinkler and a domestic main BOTH must be pulled:
(1) Limited Alteration Application (LAA) for the sprinkler work; and
(2) LAA for the plumbing work.