The Plumbing Foundation was the featured article in the September 2012 issue of the “Mann Report.” The article showcased what the Foundation does to ensure safe plumbing practices, its legislative agenda, and how the Foundation both monitors and gives back to the industry. The Majority of the article is provided below. Also enclosed is the photo of the Foundation’s officers and directors pictured in the article. For more about Mann publications please visit www.mannpublications.net.

When we think of plumbers, the common image is someone fixing leaking pipes and unclogging toilets. In reality, though, many plumbing firms are large scale sophisticated operations involving complicated systems (water distribution, sanitary piping, natural gas systems, medical gas installations, methane recovery and venting systems, and numerous green technologies including solar appliances, grey water systems, etc.) and in the 21st Century the role of the plumber is further expanding. The Plumbing Foundation of the City of New York is working diligently to make sure that we know how that role has evolved over time and how licensed plumbers are now essential to the workings of a modern changing New York City. 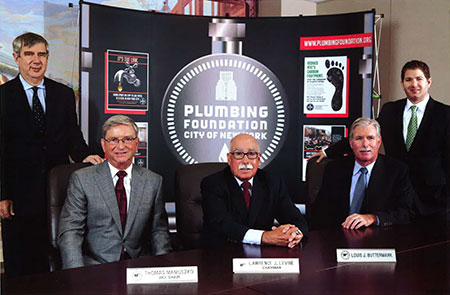 The Foundation’s officers and directors

“We are certainly not your grandmother’s plumber or even your mother’s plumber,” explained Thomas Maniuszko, Vice Chair of the Plumbing Foundation. Vice Chair Maniuszko explained that plumbers are at the leading edge of green technologies for water conservation, bUilding systems across the City with new technologies, installing gas piping throughout the City, and medical lines in hospitals and systems which prevent possible cross-contamination of the public water supply.

Founded in 1986, The Plumbing Foundation of the City of New York (“The Plumbing Foundation”) is a nonprofit association of licensed contracting firms, engineering associations, manufacturers and suppliers, whose mission is to ensure the public health through the enactment and enforcement of safe plumbing codes. The Plumbing Foundation is overseen by a Board of Directors representing some of the largest plumbing firms in New York City. In addition Foundation representatives include members of the American Society of Plumbing Engineers and the American Society of Sanitary Engineers, head officials from Plumbers Union Local One, wholesalers and select manufacturers. The Foundation represents both large and small union and non-union contractors.

Since its inception, the Foundation has developed a high level of respect from all levels of government and often speaks publicly on issues related to the plumbing industry.

The Foundation also serves as a resource to government agencies and elected officials on important pending legislation, Code issues, and the bureaucracy City government. Today, The Plumbing Foundation is recognized as the City’s leading advocacy organization on behalf of the its industry and an educational repository on plumbing issues.

Stewart O’Brien (former First Deputy, and then Acting Commissioner, of the New York City Department of Buildings, and Executive Director of the Foundation since 1997) explained that maintaining a good relationship with the government entities, that police the plumbing industry is critical to success. “It is important for us to provide the industry perspective to government, and educate elected and administration officials so that they can make informed decisions on important plumbing issues.”

One of the most crucial items for The Plumbing Foundation is to inform the public that licensed plumbers are required on specific jobs to ensure building and renovation safety. Larry Levine, Chair of The Plumbing Foundation, noted, “Landlords and Co-op shareholders risk hazardous workmanship, thousands of dollars in fines and the potential denial of insurance claims for work performed by unlicensed plumbers.” Levine further added, “With over 1100 licensed master plumbers in New York, landlords/Co-op Boards simply shouldn’t take unwarranted risks with the health and safety of their tenants. ”

The Foundation testified in support of Intro. 68-A, now Local Law 17/2010, which established minimum fines for unlicensed Plumbing and/ or Fire Suppression work. This law now sets forth minimum civil and criminal monetary penalties for individuals who perform or advertise plumbing and/ or fire suppression work without a license. Individuals who are caught will receive a $2,500 fine for a first time offensive and a $5,000 fine for each subsequent violation. When this legislation was successfully enacted, The Plumbing Foundation’s Deputy Director, Terence O’Brien, called this victory “vitally important to the core mission of ensuring safe plumbing practices throughout the City.”

The members of The Plumbing Foundation are leading the way in water conservation efforts, through the use of new technology including water recycling, ultra-low-flow toilets/urinals and individual water use meters. “The average American uses 176 gallons of water each day,” explained Foundation Chair Levine. “The average New Yorker uses only 78 — we know we play a significant role in achieving that positive disparity.”

When it comes to building with newer technologies, a number of the Foundation’s members have received specialized green training certificates for energy savings on the installation of solar generated heat and hot water. The energy-reducing technologies are an essential part of the effort to reduce the City’s carbon footprint.

WORKING WITH THE HEALTH CARE INDUSTRY

Only licensed master plumbers can install medical gas lines and back-flow devices at the City’s medical facilities, which work to ensure that water contamination does not occur in the water systems. The Plumbing Foundation successfully advocated for the passage of Intro 395-A of 2009. The bill (now Local Law #16 of 2009) requires that on February 1 and August 1 of each year, the New York City Department of Environmental Protection (DEP) submit a report to the New York City Council regarding its progress in ensuring that large building owners install and annually test back-flow devices.

The Foundation’s members serve on many of the Committees that are revising the Building Code of New York City and often testify before the City Council on plumbing related issues. For example, the Foundation is presently working hard to uphold the testing standards of employees who perform welding on gas piping. Rigorous standards and frequent re-qualifications are significant costs to plumbing contractors but a cost that is well worth the continued safety of New Yorkers.

REDUCING COST TO THE PUBLIC AND REGULATING THEIR OWN

The Foundation also works with the City to help reduce costs to the public. It often finds that on small jobs the cost of obtaining City approvals, permits, and inspections approach half of the total cost of the plumbing job. The Foundation works with the City to streamline the bureaucracy so unnecessary administrative costs are not passed onto the public.

The Foundation also realizes that any trade will have some bad apples and the plumbing industry is no exception. Accordingly, the Foundation actively investigates licensed plumbers who breach the law and works with City agencies to suspend or revoke the licenses of these violators.

GIVING BACK TO THE COMMUNITY

The Plumbing Foundation is affiliated with the Plumbing Industry Promotion Fund of New York City, which provides many charitable, educational, and scholarship programs for the plumbing industry. Recently, the Promotion Fund, which has been giving scholarships to college-bound students for decades, passed the $1 million level in scholarships awarded, helping over 400 college-bound students to defray the cost of their college education…

…In addition to the scholarship fund, since 2004, members of the Plumbing Foundation have sponsored a Golf Outing which has raised and distributed over $500,000 to worthy charities. This year’s outing was the Foundation’s most successful event to date, raising over $100,000 for the Juvenile Diabetes Research Fund.

When asked about the toughest challenges ahead, Deputy Director Terence O’Brien stated, “The turnover in government in 2014 caused by term limits will extensive. There will be a new Mayor, a new Public Advocate, a new City Council Speaker, up to five new Borough Presidents and almost two dozen new Council members.”

Terence O’Brien continued, “We hope to bring the Mayoral candidates in this year to begin the dialogue on how to move our industry forward, working together as a partner with the City.”

Since its establishment in 1986 the Plumbing Foundation has worked diligently to ensure that the plumbing industry has as little a “carbon footprint” on New York City as possible. The plumbing industry has historically utilized environmentally friendly materials like recycled cast-iron and copper piping/fittings. The Foundation will continue its role of protecting New York City as well as being an advocate for the environment by strengthening its water/sanitary regulations thereby lessening the City’s wasteful water consumption.