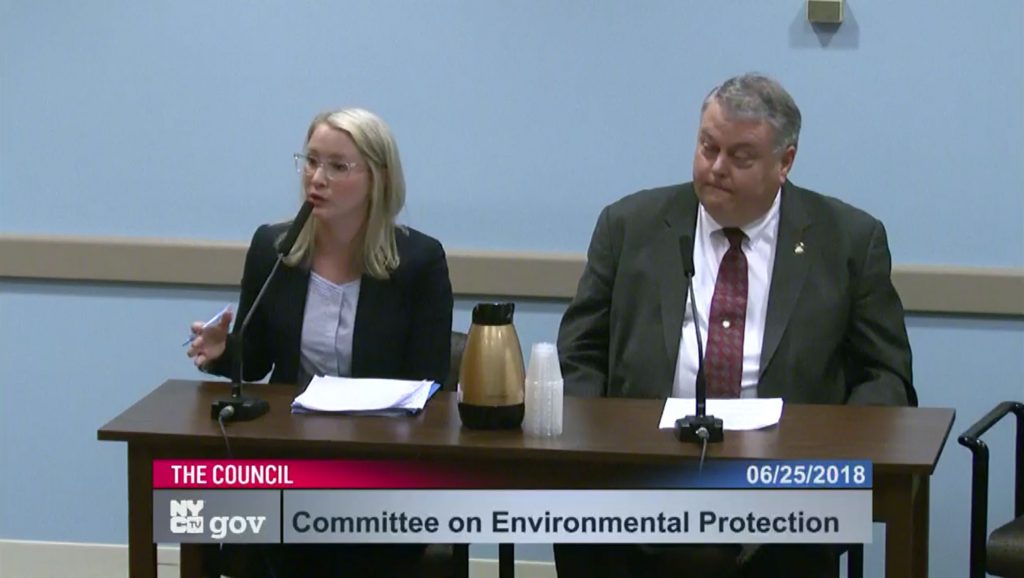 On Monday, June 25, 2018, April McIver, Executive Director of the Plumbing Foundation, testified at the NYC Council Committee on Environmental Protection Hearing in support of Intro. No. 268. This bill, introduced by Council Member Donovan Richards, requires building owners to report on the installation of backflow prevention devices, and requires the NYC Department of Environmental Protection (DEP) to report the estimated number of buildings requiring such devices and compliance rates of such buildings. “Backflow” occurs when drinking water is contaminated by hazardous substances. It happens when street pressure pushes water into buildings where dangerous materials and chemicals may exist, and no device prevents that now contaminated water from re-entering the drinking water supply. Sometimes water flow can be reversed due to a water main break or a mistaken or accidental cross connection between the building’s water distribution and drainage systems. Therefore, it is vital that buildings install and maintain backflow prevention devices to prevent the harmful results of contaminated water, which can contain bacteria like E. coli and Salmonella.

Executive Director McIver testified in support of Intro. No. 268 but also provided the Council with recommendations on how to strengthen the bill’s provisions. The Foundation’s proposed amendments included requiring DEP to report actual numbers rather than estimates, and to increase fines for failure to install a required backflow prevention device. Currently, fines imposed on building owners are lower than the actual cost of installing backflow prevention devices, which incentivizes owners to just pay the lower fine rather than pay for installation. Also testifying in support of the bill was Arthur Klock, Training Director for Plumbers Union Local No.1 (pictured above).

The installation of backflow prevention devices should be considered a public health priority by the City of New York. It is apparent that the understanding of and compliance with backflow prevention is still an issue at large in the City. There is limited transparency on the part of DEP regarding enforcement, installation of backflow devices, and proper comprehensive reporting­—all of which needs to change. The Plumbing Foundation will continue to work with the City Council and City agencies to increase transparency and enforcement.