Keep current with important industry news.
Follow Us
Remember congestion pricing? Not surprising if it has slipped one’s mind. To refresh one’s recollection, in 2019, the New York State Legislature passed a congestion pricing law as part of its 2020 budget legislation, known as the “Traffic Mobility Act.” The law established a “Central Business District” within which tolling must be imposed. The Central Business District consists of any roadway, bridge, tunnel, approach, or ramp located south of 60th Street in Manhattan but not the FDR, West Side Highway, Battery Park underpass, or Hugh Carey Tunnel. The law also established the Traffic Mobility Review Board, which is tasked with developing recommendations to be submitted to the MTA’s Triborough Bridge and Tunnel Authority (TBTA). These recommendations are supposed to include the cost of the fees imposed in the Central Business District as well as any credits, discounts, and exemptions. The tolls imposed must generate $15 billion in bonds to fund the MTA. To date, the Traffic Mobility Review Board has not issued recommendations which were first projected to be submitted by the end of 2020 with the State’s expectation that the plan would become effective in January 2021. This has not happened. While public hearings began in fall 2021, there has still been no update on the Board’s recommendations. One explanation for the delay stems from the fact the roadways associated with the Central Business District have received federal dollars. Due to this, New York is required to have an environmental impact statement conducted by the U.S. Department of Transportation to establish its congestion pricing program. According to a recent article, Governor Kathy “Hochul and MTA officials have pointed to the federal government’s lengthy approval process for knocking the plan off schedule, citing 425 comments on the project’s environmental assessment.” The topic was raised in a recent Governor’s debate and all candidates, including Hochul, supported a delay. While there was some speculation that Governor Hochul was not fully supportive, another recent article explains she is “100%” in support of congestion pricing. That article also says she met with federal officials to “discuss[] the hundreds of objections and requests for additional information made by federal officials in response to the Metropolitan Transportation Authority’s initial study of the toll’s environmental and economic impacts.” Still, there is no clearly established timeline for the environmental assessment or the recommendations for the plan. Because the Plumbing Foundation City of New York, Inc. expects an impact on NYC’s plumbing industry as a result of congestion pricing, we are closely monitoring the issue and are prepared to submit comments in support of an exception or discount for those working in the service industry who must respond to 24-hour emergency calls. *UPDATE 6/30/2022: According to an article, the MTA has said in a Board Meeting that it has answered the 400+ questions about how the environment might be impacted if it charges drivers a fee to enter Manhattan below 60th Street, in response to the federally mandated environmental assessment. Next steps include approval from the Federal Highway Administration, but there is still a long road ahead: the MTA “must conduct more public outreach, install devices to collect the tolls, and set a price that will ultimately raise $1 billion a year in revenue.” Accordingly, the MTA said it expects congestion pricing will go into effect by the end of 2023.

The Plumbing Foundation City of New York, Inc. hosted a three-part webinar series in which experts discussed water efficiency, Legionella prevention, and the importance of preparedness against backflow.

The recordings are no longer available, but if you are interested in the videos and/or materials presented, please email info@plumbingfoundation.nyc.

Coinciding with World Water Day, this panel discussed water efficiency and sustainability methods, the role of the Licensed Master Plumber, and ways owners can work with their plumber to conserve water usage and increase sustainability. Our expert panelists included:

This panel discussed the Legionella problem and what more can and should be done in New York City to prevent and combat Legionnaires’ Disease. Our expert panelists included:

This panel discussed the impact of recent mega storms on NYC homeowners, the Citywide Climate Adaptation Plan passed by the NYC Council last October, as well as the existing backflow prevention requirements and why it is vital to comply with installation and testing requirements. Our expert panelists include: 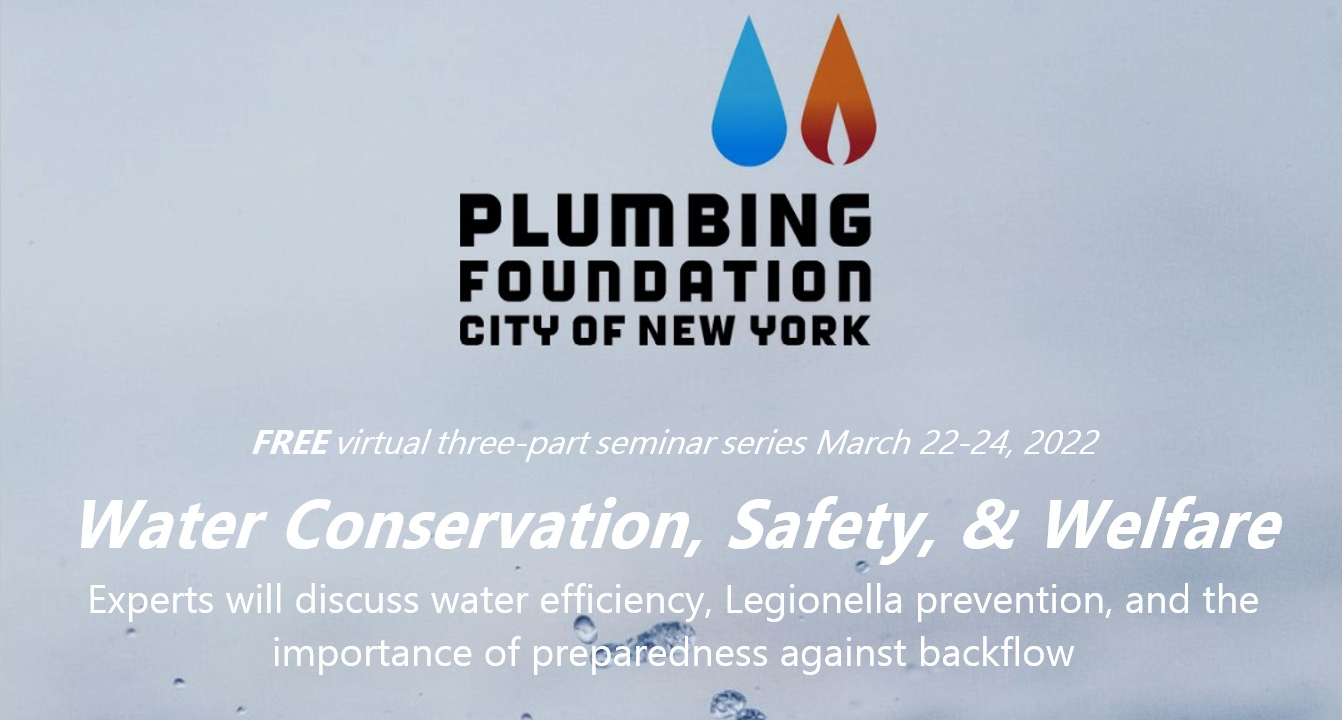 Please join the Plumbing Foundation for a FREE virtual three-part seminar series March 22-24, 2022! The Water Conservation, Safety, & Welfare series will entail experts discussing water efficiency, Legionella prevention, and the importance of preparedness against backflow. Please click on the applicable event to register! Part 1: Water Efficiency – March 22, 2022 at 10-11am Coinciding with World Water Day, a discussion on the role of the Licensed Master Plumber and ways owners can work with their plumber to conserve water usage and increase sustainability. Our expert panelists include: Part 2: Legionella Prevention – March 23, 2022 at 10-11am An overview on the Legionella problem and what more can and should be done in New York City to prevent and combat Legionnaires’ Disease. Our expert panelists include: Part 3: Backflow Preparedness – March 24, 2022 at 10-11am A discussion on the impact of recent mega storms on NYC homeowners, the Citywide Climate Adaptation Plan passed by the NYC Council last October, as well as the existing backflow prevention requirements and why it is vital to comply with installation and testing requirements. Our expert panelists include: Registrants will receive a Zoom webinar link the day before the applicable event.
In the waning hours of his administration, Mayor deBlasio has misled the City Council to eliminate reliable natural gas, thereby limiting NYC to rely exclusively on electricity for heating, cooking, and hot water. His administration claims it is doing so in the best interests of the climate and NYC businesses and residents. Ask anyone who is a documented and substantiated expert and they will tell you that, based on the SCIENCE, electrification by 2023 or 2027 is not smart, not viable, and not “green.” The advocates for this ill-conceived plan claim to rely on science, but in fact, the science does not support a conversion to full electricity as a sustainable, green, and reliable means of powering NYC. Intro. 2317A prohibits the use of ANYTHING but electricity. How can electricity be the savior for New York City’s climate crisis? It can’t and isn’t. If it were the answer, the federal infrastructure bill signed into law by President Biden less than a month ago would not have invested almost 10 billion dollars into hydrogen (a gas, not electricity) as a part of the fight against Climate Change. The advocates also either failed to mention or the City Council chose to ignore the fact that 70% of electricity production needed to supply NYC’s electric demand is currently produced using some level of fossil fuel consumption. Does that sound “green”? If the science is there, why is a viability study under this bill due the same day the ban goes into effect in 2023? How can City Council members make an educated, informed decision without the information they need to do so? It is irresponsible to restrict buildings from use of other green fuel sources, many of which are being developed, and instead rely solely on electricity, which is not “greener” than gas. We have seen what happens when there is no diversification. We’re not talking just about power related issues like the ones that crippled NYC post Super- Storm Sandy or the Texas grid issue this past winter. A one source approach which is not backed by science is bad for everyone (tenants, homeowners, developers, the current infrastructure, and the environment). The City’s approach should instead be to help support and encourage all clean, green solutions, including gas, instead of relying on a short-sighted, one-size-fits-all approach. PRESS RELEASE: Strong Concerns with NYC Intro. 2317A (gas ban legislation) FROM: Association of Contracting Plumbers City of New York CONTACT: Terence O’Brien 212-481-4580 / t.obrien@acpcny.org DATE: December 14, 2021 Download PDF version of Press release The Association of Contracting Plumbers of the City of New York Inc. (ACP), is a trade association of New York City licensed, unionized plumbing firms. Established in 1881, it is the oldest organization of its kind in the country. ACP member firms have built and maintained the sanitary, fuel gas, methane retention, solar heat/solar hot water, and medical gas systems in countless New York City buildings. ACP plumbing firms protect the health of all who live, work, and visit New York City.
The Plumbing Foundation City of New York, Inc. hosted a discussion on November 9th on the role of hydrogen in the implementation of climate protection policies to meet our local carbon emission goals. Also discussed was systemic resiliency and why total electrification for heating and cooking is not viable or cost efficient in NYC. A link to the webinar is available here. Presentations and supporting materials available for download below:
Seminar date: Feb 18, 2021 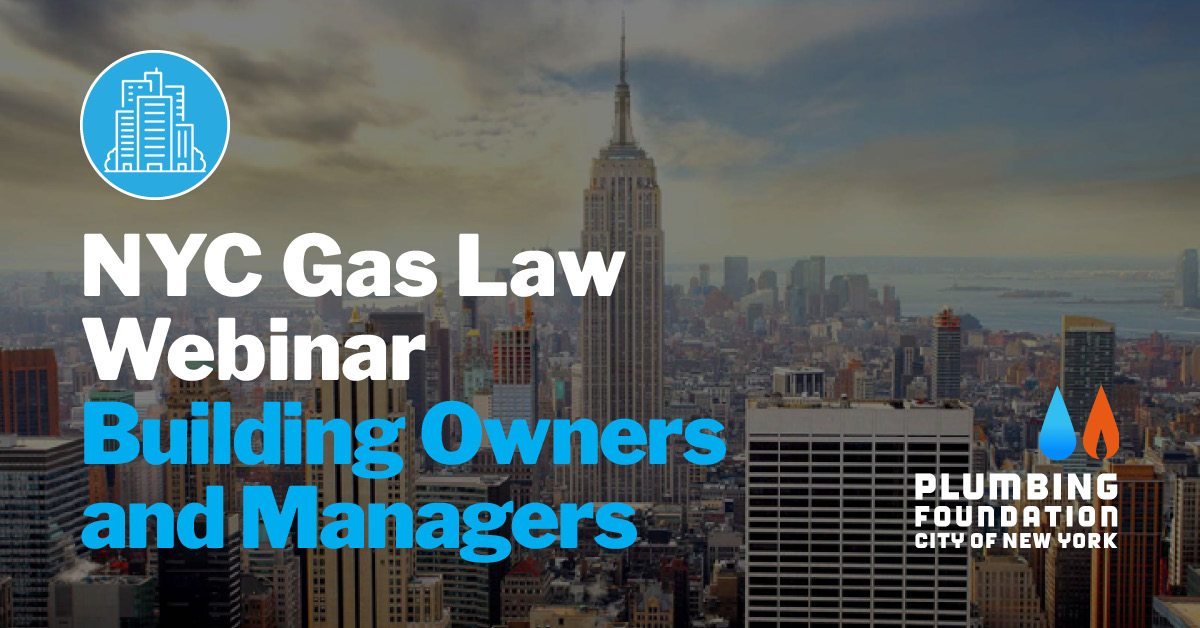 Seminar Recording: https://zoom.us/rec/share/OykqO_3VZ3kycuPIYYObniqQrVZPU0O-726oTMR7FSEG0nH1ocMEiv89edoqpPI0.3dx_JDLBj2ffC3YY Contact us for more information or if the link above has expired.
Seminar date: Feb 18, 2021 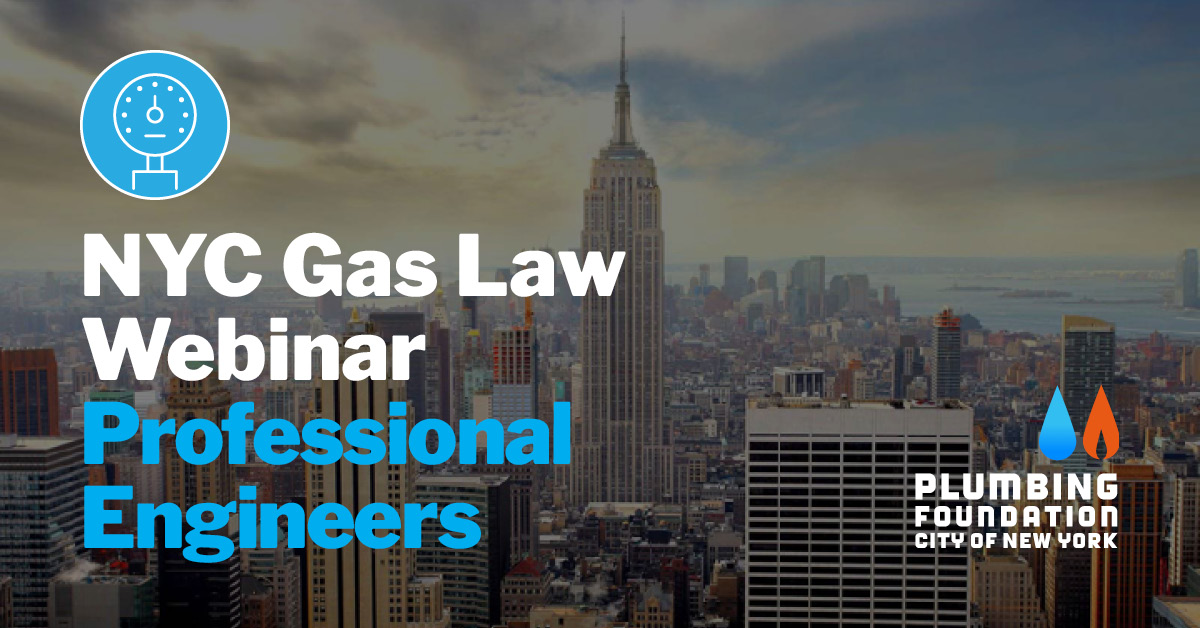 Seminar Recording: https://zoom.us/rec/share/JIQK__l9SMRjKmEUiZgYK7At64WHwDrsLfXZKcJKSiKr03pf4ll-url_E7Qv8GmC.XkrIoDyzhzIKeSFs Contact us for more information or if the link above has expired.

On Tuesday, February 16, 2021, Terence O’Brien, Senior Director of the Plumbing Foundation, testified virtually at the NYC Council Committee on Environmental Protection Hearing in support of Intro. No. 1576, which proposes to increase the penalties imposed on owners failing to comply with the mandatory installation of and reporting requirements for backflow prevention devices.

“Backflow” occurs when drinking water is contaminated by hazardous substances. It happens when street pressure pushes water into buildings where dangerous materials and chemicals may exist, and no device prevents that now contaminated water from re-entering the drinking water supply. Sometimes water flow can be reversed due to a water main break or a mistaken or accidental cross connection between the building’s water distribution and drainage systems. Therefore, it is vital that buildings install and maintain backflow prevention devices to prevent the harmful results of contaminated water, which can contain bacteria like E. coli and Salmonella.

Senior Director O’Brien urged the passage of Intro. No. 1576 to properly incentivize compliance with the law. The NYC Administrative Code currently allows first-time fines to be imposed anywhere from $50–$1,000 for violation of the requirement to install a backflow device. Such fines do not provide enough of an incentive for owners to comply with the law. In a former Council hearing, the NYC Department of Environmental Protection (DEP) clarified that the Department fines building owners $500-$5,000.* In contrast, a backflow device itself can cost up to $20,000. This is why the industry believes fines should be increased, so that owners do not continue merely paying the lower fine but rather comply with the law and actually install the required devices.

O’Brien testified that Intro. No. 1576 addresses the problem as outlined above. It would increase the monetary penalties to be imposed on a building owner or operator who fails to comply with installation and reporting requirements for backflow prevention devices.

The installation of backflow prevention devices is a public health priority. It is apparent that the understanding of and compliance with backflow prevention is still an issue at large in the City. Steep fines must be imposed on owners who fail to comply with the law in order to property incentivize compliance.

View an archive of our NYC Gas Laws seminar. Available for the next 30 days. 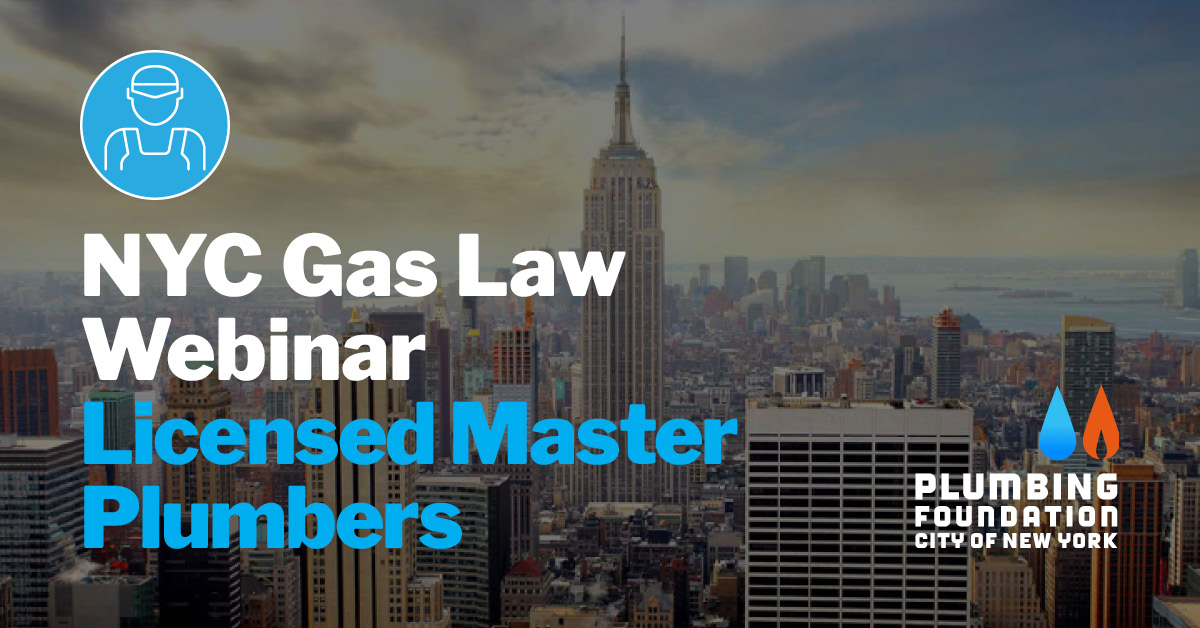 Seminar Recording: https://zoom.us/rec/share/Np9XJC7_f3spor27LQlR9v9XeJy49Phgfi8pvQwlXyeRzmIgodbqS5OE-r8goUgk.OMOyjExHhpj73eJX Contact us for more information or if the link above has expired.
NYC Licensed Plumbing Community Survey: How do you think the ConEdison Yellow Book can be improved?